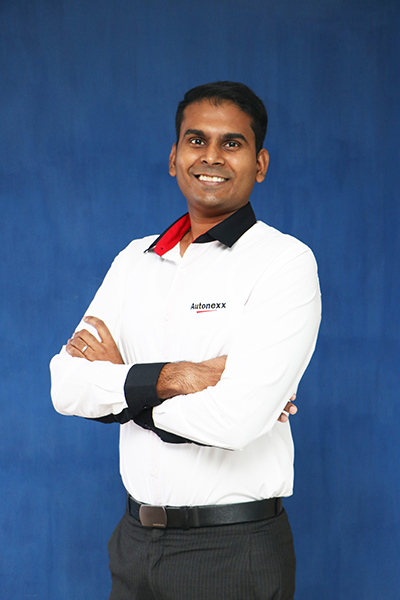 1. Hello Ally! After 29 years under the name of its founder (editor's note: Raouf Dusmohamud), your company operated an important rebranding in 2019. What was your objective?

The objective of the rebranding was to dissociate our company which was associated too closely with the Proton brand which represented only 10% of our turnover by 2019. With the launching of both the MG and the imported car business in 2018 and 2017 respectively, we needed a more marketable company name to better relate to the Mauritian public.
Under Autonexx, both the MG brand and the recon business have thrived to become 2 key SBUs of the group. Autonexx has also managed to overhaul its workforce bringing down the average employment age from 50 to 39 years old.
With a new team, new branding and new products in place, Autonexx has managed to carve its place as a major player in the automotive industry with a turnover above MUR 300m in FY 2021.

2. You historically import Perodua and Proton in Mauritius, can you tell us more about these brands that are sometimes not well known to the general public?

Both Proton and Perodua are originated from Malaysia with both having strong ties to the Malaysian government. However as at 2021, both are now privately owned by major international groups with Perodua having a strong connection to the Toyota/Daihatsu group and Proton more recently being partially acquired by the Geely Group.
Perodua is considered to be a subsidiary of Daihatsu Motors which is itself a subsidiary of Toyota. The former is specialised in making smaller displacement cars (max 1500cc) catering the entry level segment of the automotive market. Using powertrains directly derived from the Japanese giants, they are very reliable cars that are meant for everyday use.
Currently Mauritius is limited to 4 models only being the best seller Axia, the Bezza, Myvi and 7 seater Alza.
Proton, our original brand distributorship (since 1990) has known a topsy turvy time this past decade with major restructuration happening at both ownership and corporate level.
The company was acquired at 49% by the Geely group, which is a major car manufacturer in China (over 1.2m cars sold annually in China) and also beneficial owner of Volvo cars since 2010.
Geely’s plan with Proton is to make it a powerhouse in the right hand drive markets in which it is represented by injecting both capital and technology into the company. With technology shared by Volvo, Geely is completely changing the line up of Proton cars with the new models being imported in Mauritius as from 2021 being the new Proton X70.

3. Your Proton range has just been enriched with a new SUV: the X70. It appears that Proton is in the process of repositioning. Tell us more.

With the X70, we have launched a new branding for Proton being X-Series by Proton. The latter are a new breed of SUVs and crossovers codenamed X that will be launched in Mauritius in 2021. The first model is the X70 and a second model the X50 is scheduled for Q4 2021.
X-Series are what we like to call middle luxury vehicles that offer you top of the line technology and comfort for very reasonable prices. With both models using the JLH-3G15TD 1.5 Turbo Petrol engine jointly developped by Geely and Volvo and it’s wet DCT 7 speed gearboxes, the X-series SUVs are using premium powertrains.
With X-series, Proton is definitely repositioning themselves as medium luxury vehicles with a tendency towards SUVs.

4. You added the MG brand to your catalog in 2018. Morris Garages was originally an English brand now owned by Shanghai Automobile Industry Corporation (SAIC). What remains of the soul of this brand with a rich and long history?

MG is currently our success story. Relaunched in 2018, MG SUVs have gradually become best sellers of their respective categories. SAIC Motor being the owner of the MG brand has global aspirations. With a re-entry in the European market on the cards, MG will slowly go towards electric mobility with the Marvel R launched for the European market this month.

For Mauritius, with the MG ZS and HS, we currently target a monthly sales of 30 cars which we have been successful in achieving in Q2 2021. However we are expecting some difficulties in delivery for Q3 2021 due to the global chip shortage manufacturing problem and an increasingly difficult environment for freight transport to Mauritius.
For 2022, we have big plans with a new target of 400 cars.

5. To see the number of ZS that roll on our roads, success is at the rendezvous. What would you say to those still wondering about the durability of these Chinese-made vehicles?

We have officially announced the opening of our new MG Flagship showroom in a press conference on the 29th July 2021.
MG will move to Ebene, The Core building as from October 2021.
A dedicated showroom with over 4,300 sq.ft and a capacity of housing 10 cars on display at all times, we are making it a world class destination for car lovers.
We will have the first showroom to open in Ebene and the first to do so in a prime commercial space given its location. With most car dealers moving to the Bagatelle area, we wanted to be different by offering a more inclusive experience to our customers. This is a concept myself and my management team have experienced first hand in bigger countries like Thailand, UK and Malaysia.
We have loads of new innovative surprises to come with the opening of the showroom in October 2021.

6. Apart from the Proton X70, what are the next new models that you expect?

From Proton, we have the X50 that will arrive by end of year. From MG, we have the new MG5 coupe that we hope to launch by end 2021.

6. Finally, we always ask what would be the car of your dreams?

A platform
with exhaustive
information

MyCar.mu is a platform with exhaustive information of all new and used vehicles for sale, and associated products and services, in Mauritius. In a few clicks, you will be able to put your vehicle for sale, and to access a large catalogue of cars, vans, buses, trucks, motorbikes, boats and boat engines with pictures, details, prices, leasing and insurance facilities.

STAY IN TOUCH
BE THE FIRST TO HEAR ABOUT THE LATEST PRODUCT RELEASES
Our monthly email newsletter will keep you informed of new products, special offers and upcoming events.